It is preferable to have trigonometric functions (sine, cosine, tangent, etc.) defined so the domain of each function is the set of all possible real numbers. Generally, when we speak of degrees and minutes it is an acute angle, an angle that is less than 90°. This limits us to the increments of degrees and minutes. Radian Measure is not based upon increment and thus radian measure includes all possible real numbers.

Radian measure is direct result of a central angle that has its vertex at the center of a unit circle, a circle having a radius of one: 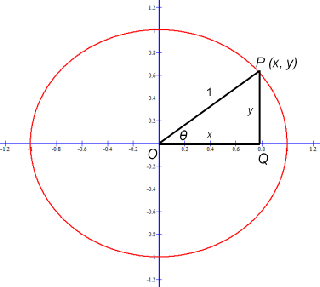 If we consider point P on a unit circle in the first quadrant:

The coordinates of P are the cosine and sine of angle θ.

Angle θ is the central angle, an angle formed by two radii of a circle. The measure of a central angle is proportional to the length of a circle between the two points of each radius.

From this a radian is defined as the measure of the central angle that subtends an arc whose length is that of the radius. For a unit circle that length is one unit. 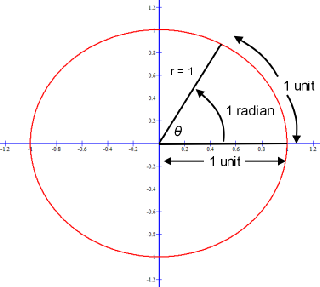 Equating Radians to Degrees
or Degrees to Radians:

We can state this proportionality between degrees and radians as: 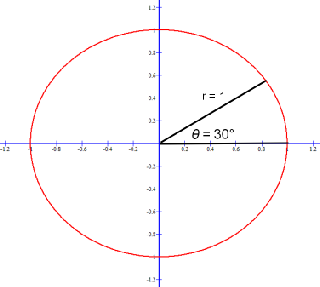 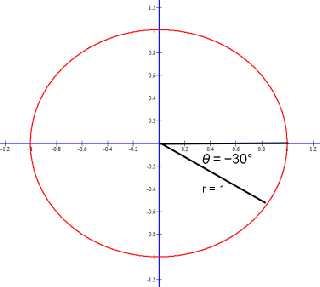 Radians and the Trigonometric Functions:

In physical science applications there is often a need to work with time and the ability to state the cosine t and the sine t, where t is a number of seconds. For this and other purpose the trigonometric functions can be extended so as to apply to any number of radians. This was shown for a point, P; P = (x, y) = (cos θ, sin θ). The coordinates of P are the cosine and sine of central angle θ. The terminal side of the angle intersects the unit circle at P, with coordinates (x, y). The cosine θ is defined to be x and the sine θ is defined to be y. This means that the cos and sin of any possible number is defined.

By proportionality we already know that:

For these angles their point, P, values for x and y can only be 1, −1 or 0. These angles define a terminal side that is on the x or y axis, respectively the cos θ or sin θ. 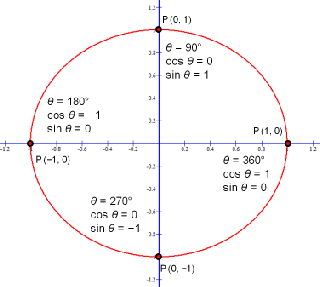 All other angles are acute having the initial side along the x-axis from the circle coordinate center (standard position) and a terminal side not parallel the x-axis or y-axis. By this definition we only need consider the coordinate quadrant (I, II, III or IV) to determine the positive or negative sign of the cos θ and sin θ.