The ellipse is similar to a circle. The difference, an ellipse has two axes of symmetry. The longer axis is the major axis and the shorter axis is the minor axis.

An ellipse has two axes of symmetry. This image shows the Ellipse for equation 2x2 + 4y2 = 8: 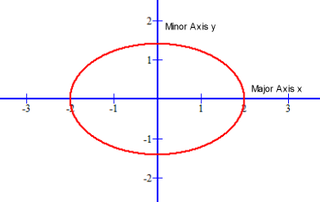 The standard form of the equation of an ellipse with its center at origin and major axis on the x-axis is:

where a ˃ b 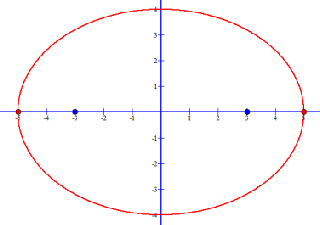 The ellipse with center (0, 0) shows its vertices as red dots and foci as blue dots.

If we interchange the roles of the x and y axis, we obtain the following result:

The standard form of the equation of an ellipse with center at (h, k) and major axis parallel to the x-axis is: 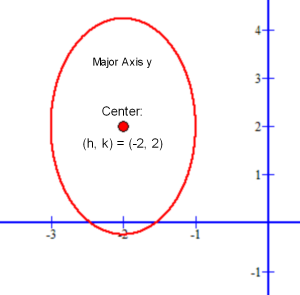 with A and C not equal, but with the same sign, is the general formula of the equation of an ellipse. It is given by the conics general math definition.

Then, by definition, the equation 4x2 + y2 + 16x − 4y + 16 = 0 is an ellipse. This general math form of the equation for an ellipse can be converted to the standard form by completing the squares and dividing both sides of the equation to make the constant on the right side equal to 1:

“Once an ellipse equation is standard form it is easiest to determine its vertices, foci, center, major axis and minor axis.”

The ellipse has many practical applications in science and technology: 1) A Planet’s travel is elliptical with one focus being the sun, 2) Elliptical gears, used in power punch and pressing machines, produce a powerful stroke with fast return, 3) Noise control; a whispering gallery room likely has an elliptical ceiling or ceilings arranged so that a noise produced at one focus can only be heard at another focus, between foci noise cannot be heard.