What is a Parallelogram?

A Parallelogram is defined as a four-sided plane object having opposite sides that are parallel and equal. As plane geometry figures they are flat objects on a level surface with length or height and width or base dimensions. All Parallelograms are classified as Quadrilateral.

Excellent types of Parallelogram shapes are Rectangle, Square and Rhombus.

Finding the Area of Parallelograms

The formula for the area of any Parallelogram is:

Area = Width × Length or Base × Height

The Rectangle is the ideal definition of a Parallelogram with its parallel opposite sides of equal length. Opposite sides are congruent and all corners form congruent 90 degree angles. 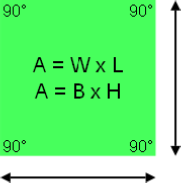 Square objects differ from all other Parallelograms by having all sides of equal length and each corner a 90 degree angle. All sides and all corners are congruent. 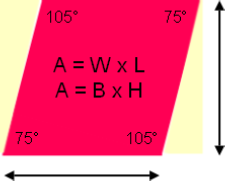 The sum of angles of a Parallelogram equals 360 degrees. For the Rectangle or Square the sum total of four corners, each a 90 degree angle, give us 360 degrees.

By knowing the corner to corner measurement of any side, as a straight line, and the degrees of angle at any corner we can attain the total area of a Rhombus. To explain how, suppose the red Rhombus has two opposing angles each 75°, the other opposing angles each are 105°. Also suppose the measurement of any line side from corner to corner is 5. The area can be determined by Trigonometric Sine:

The same Trigonometric method can be applied to obtain total area of a Square object, but is unnecessary. Each corner of a Square is 90° and the Sine 90° is 1. To find the area of a Rectangle this method cannot be used. By definition a Rectangle’s Length or Height measurement differs from its Width or Base. 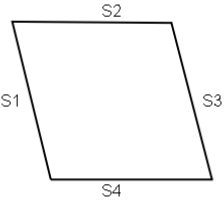 Perimeter is a border measurement. 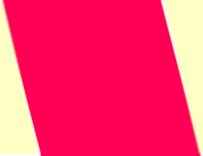 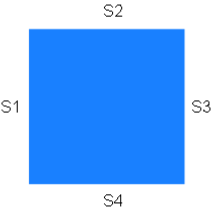 A Quadrilateral is a plane figure with four sides and four angles that when summed equal 360°. The less popular synonyms Tetragon and Quadrangle are sometimes used to describe a Quadrilateral shaped figure. 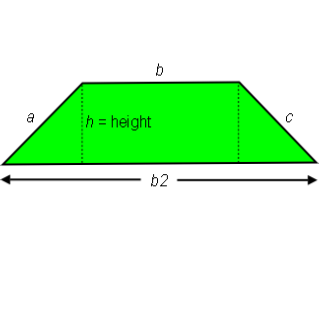 The diagonals (line sides a and c), of an Isosceles Trapezoid are always congruent. This creates two triangles that are, except for orientation, identical. It also means the Trapezoid sides labeled b and b2 are parallel. 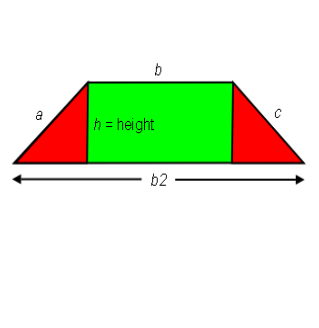 Width or Base of Isosceles Trapezoid = 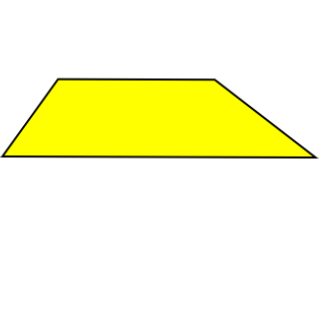 An ordinary Trapezoid does not have the symmetry of the Isosceles Trapezoid.

A Trapezium is a Quadrilateral without parallel sides.