When we write the coefficients for a binomial that is raised to a power, (a + b)n , we expand that binomial. Pascal’s Triangle is a convenient way to remember the pattern for expanding binomial coefficients. These are the same coefficients that had been determined by Factorial math until the French mathematician Blaise Pascal in the mid-sixteen hundreds introduced the coefficient triangle to the Western world. Prior to this introduction the Chinese text Precious Mirror diagrams Binomial Expansions. 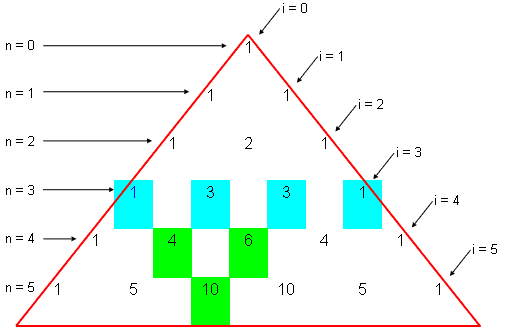 The elegance of Pascal’s Triangle is the simplicity it provides to expedite a Binomial Expansion regardless of the number of terms. If we were to consider (a + b)3 using factorials the binomial expansion would look as:

We would next determine the values of each factorial quotient:

By using Pascal’s Triangle there is no need to evaluate factorial quotients. The triangle provides us the binomial coefficients, the powers of a and b of each term, and the number of terms for the resulting (a + b)n expansion formula. All we need to do is to first look at the row of the triangle corresponding to the value of n. This provides us the binomial coefficients. For n = 3 the coefficients are: 1,3,3,1. This also tells us the resulting binomial formula will have 4 terms: