Much of our knowledge of basic everyday mathematics is taught to us in pre-k thru k-6 education. Young children quickly learn money gets things they want. Use coins and dollars to help them develop an understanding of counting and math, real or play money. Work fractions, decimals and percents into the learning. 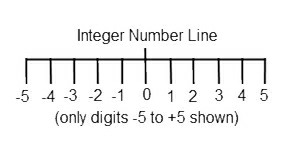 Rational numbers often present the result of a mathematical integer operation as a fraction. Fractions are quotients of integer math.

Both math integers and rational numbers can have math signs “−“ (minus; less than zero) and “+” (positive; greater than zero). For results that are positive the “+” math sign is usually omitted. Without a math sign a numeric value is assumed positive.

The least complicated math is basic arithmetic to quantify by count, sum or measure. It consists of integer addition, subtraction, multiplication and division methods then progresses to rational number fractional, decimal and percent numeric forms. Basic arithmetic is concrete math, easiest to learn and must be understood before advancing to other discrete mathematics.

It is common to learn basic properties of arithmetic for binary numbers, prime numbers, trigonometry, exponents, logarithms and geometry after basic arithmetic. These additional mathematical methods are applied every day by many people at work, home, during recreation and play.

Let me share the experience I had with my daughter:

Beginning when she was three years old I would sit with her on my lap or on the floor and we would play simple math counting games using fingers, sticks, coins or other readily available objects. Sometimes we’d use hand-held fun math games or books that had pictures and counting.  I’d review addition, subtraction, multiplication, division and fraction flash cards with her. A benefit of flash cards is they show math problems together with solutions. When we went to a park for a couple of hours we’d find small stones and play simple counting games, if only for ten minutes. It was learning while playing.

Most children enjoy play that involves interacting with a parent or by a parent approved adult. During play I spoke to my daughter using numbers and words pertaining to the math flash cards or game. Flash cards can be used repetitively, provide concrete examples and typically proceed from easy to more difficult. Repetitive and concrete is important for child learning. Using objects other than math cards for counting provides development of concept generalization and abstraction.

One Saturday afternoon I took my daughter, now in the first grade, to a state park some distance from home. While traveling I asked her what she was learning in school. She said they had learned addition and subtraction of 3 digits, then asked to play a math game. She never enjoyed car rides and was getting bored. I verbally provided her addition or subtraction of 3 digit numbers, one arithmetic problem at a time. To my pleasant surprise she was doing them in her head giving a first time correct answer averaging 4 out of 5 math problems!

By the third grade she understood that arithmetic and other basic mathematics were solid beginnings. She understood that algebra, geometry, trigonometry, calculus and statistics are other advanced mathematics based on rules of arithmetic. This must have had a positive impact. When she entered seventh grade she asked to begin algebra, a ninth grade class. The school administered a pre-requite math test. She scored 49 of 50 correct.