The standard form for single variable quadratic equations is:

There are two methods of solving these equations: 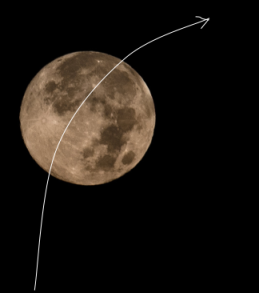 Parabolic flight path of space ship near planet can be quadratic.

A quadratic polynomial without a first degree term having only a second degree term and constants is a Pure Quadratic. These are unique form equations and are easily solved by determining the square root of the constant.

A similar application of a trajectory is a space ship that while traveling passes near a planet. The planet exerts its gravitational pull on the ship causing a slight change to its flight path that can be defined as quadratic. The change of direction must be known to assure the flight path remains correct for the space craft’s destination.